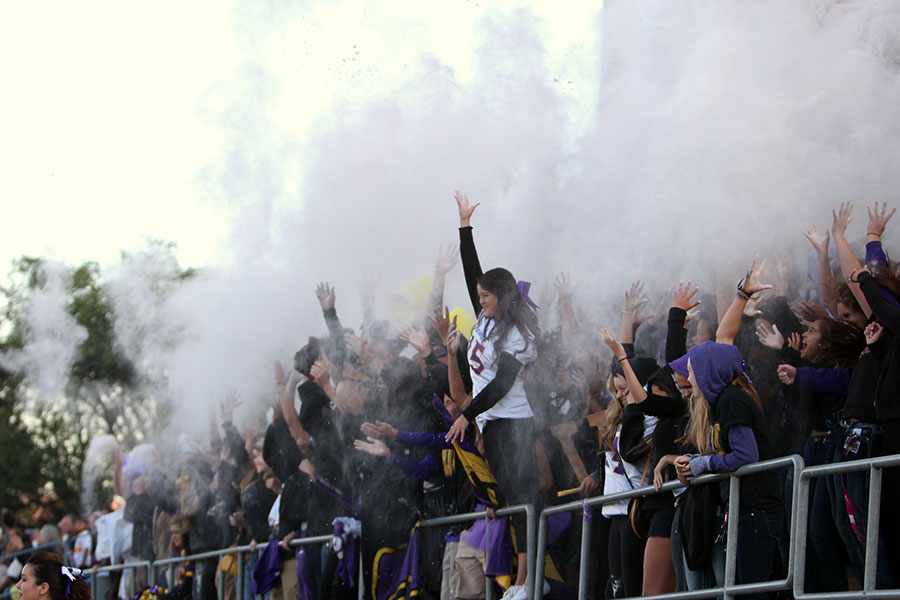 Students in the Panther Pit throw flour at kick-off as the Eastmont football game begins Oct. 10.

The loud, the proud, and the positive ‘Panther Pit’

An inside look at Wenatchee High School's student section

Students pile in, all around a nucleus of purple and gold clad kids wielding flags with painted faces. They blast pump-up music from a speaker, yelling chants to intimidate the enemy team. They aren’t affected by the cool winds that howl on fall nights, instead they’re hot from the packed in and sweaty group of cheering bodies.

This is the student section at Wenatchee High School football games. This is the Panther Pit.

At the helm of the student section are seniors Izzy Garcia and Maya Aguigui. For a couple years now, there has been a tradition of passing the WHS flags down to the new “leaders of the pack.” According to Garcia, he wasn’t expecting to be selected, but then he got a text from 2014 WHS graduate Ali Marboe.

“She texted me the day of graduation and told me to take the flags and to be loud and be proud,” Garcia said.

Garcia also noted how special it is to him to be up front at the Panther Pit. “It’s an honor. I get to help encourage the guys out there on the field,” he said. “They’re a big part of the school, and it’s just fun trying to raise more school spirit.”

Though part of the appeal to Garcia is the tradition, he also said he enjoys adding to it, citing the student section themes this year as something new. “We can start our own traditions, the themes are a great way to do this,” Garcia said.

He said that behind all the obvious “rah-rah spirit” there’s something deeper. “It brings the students together on a Friday night. It’s a great way to end the week,” Garcia said. “It’s more than just football — it’s a lifestyle.”

Senior Jacob Prater spoke on what he saw as improvements in the Panther Pit. “It’s a ton better this year than any year since I’ve been going here,” Prater said. “Other years have had a ‘we’re too cool to be here attitude’ but [this year] everyone’s out there to have fun.”

While the Panther Pit is primarily thought of as a component of football and to a lesser degree, basketball, this year the enthusiasm for other sports has spread, and the student sections at volleyball and soccer games have seen an influx of people.

“Football was that sport people came and dressed up for,” Prater said. “Now we do that for all the sports. From a player’s standpoint, it makes a great difference.”

Senior volleyball player Kendall Still commented on the impact of having a larger student section at the games. “It absolutely helps,” she said. “The louder it gets, the more energy it gives us.”

For people who’ve been going to WHS for four years like Prater, the madness and intensity of the Panther Pit is usual, but for exchange students like senior Chiara Berner, it’s a new and exciting thing.

“I like that they cheer,” she said. “It differs from Switzerland because we don’t have sports in school. There’s no school spirit or anything like that so that’s why all the exchange students think [the student section] is really cool.”

While the Panther Pit is generally thought of as a place for positivity and community, some have another perspective. An example is the cheerleaders, who often hear derogatory remarks and see poor participation in their official cheers.

“They tell us to shut up or sit down,” sophomore cheerleader Amy Sand said. “It hurts because we spend a lot of time to get ready for the games. But they don’t pull us back. We don’t need their negativity.”

Another often unseen aspect of the student section is the use of alcohol and other drugs.

“There is definitely use of alcohol. It’s a small group but it definitely happens,” a WHS student who wished to remain anonymous said. The student spoke of the effect it has on the game.

“It makes the game more fun and exciting. You don’t care what you yell and you become ignant,” anonymous said. “For the game, it’s crucial.”

It is in this way the Panther Pit mirrors high school life, both the good and the bad. At the end of the day though, the Panther Pit is a place where students come together to cheer and participate in their school activities.

“It’s just like a huge adrenaline rush. I love Panther sports,” senior Drake Lewis said. “When you’re supporting the team, they feel worthwhile and it improves school spirit all around.”

One Response to “The loud, the proud, and the positive ‘Panther Pit’”