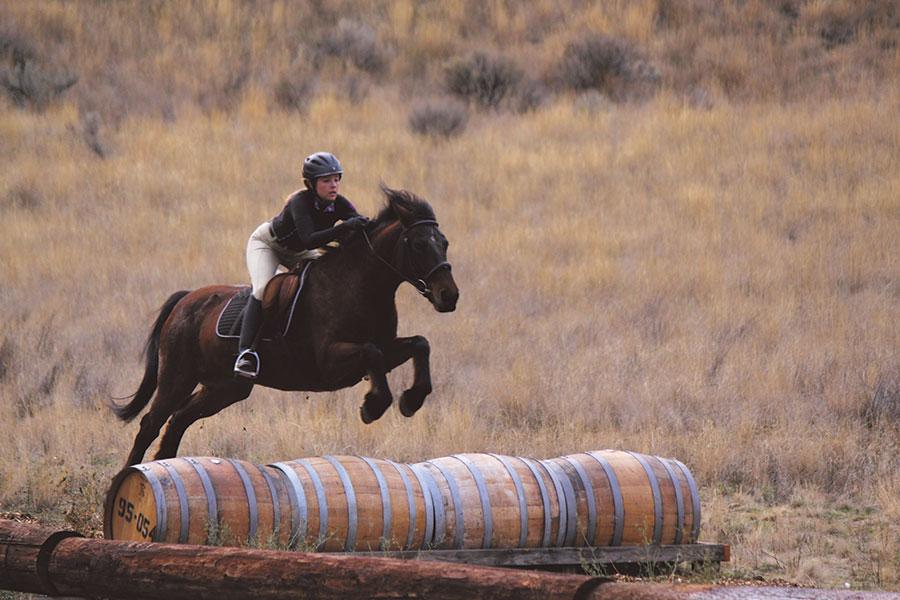 Senior Jessi Fore practices leaping over barrels with her horse, Kiana. “Kiana knows me just as well as any other person. It is such a surreal connection,” Fore said. (Kiana Wilson)

Senior Jessi Fore practices leaping over barrels with her horse, Kiana. “Kiana knows me just as well as any other person. It is such a surreal connection,” Fore said.

Going on the ride of their lives

The feeling of the wind through her hair, streaming out behind her — not blowing furiously, but spiritedly. The smell of nature in the air, complete with the trace of morning dew from the sprinkle last night, and the nip of coldness in the air that pricks her nose with the reminder of winter. The sound of the — no her — wild animal’s four hooves pounding on the ground below her, ready to take her wherever she feels the need. The sense of trust between her and her mighty beast, which inspires both senses of freedom. To an equestrian, this is one of the greatest feelings in the world.

Equestrianism, more often known as riding, horseback riding, or horse riding refers to the skill of riding, driving, steeplechasing or vaulting with horses. This broad description includes the use of horses for practical working purposes, transportation, recreational activities, artistic or cultural exercises, and competitive sport. At Wenatchee High School, horseback riding would usually refer to the recreational and competitive sports or hobbies.

There are many forms of competitive horseback riding. Some of these activities include horse racing, polo, rodeo, reining, and hunting. The major categories of horseback riding are English and Western riding. English riding involves more traditional events such as eventing, show jumping, and dressage. Western riding is often associated with ranching and includes events such as barrel racing and cattle roping.

“Personally, I do three-day eventing, which puts together Dressage, Stadium Jumping, and Cross-country Jumping, into one competing category of riding,” senior Jessi Fore, a horseback rider at WHS said.

Some people may argue, but these specific people consider this seemingly fun hobby as their sport.

“This is my main sport. I mean I used to do other sports, but horses pretty much take up your whole life. They are my life,” junior Grace Vejvoda said.

It certainly requires a sports-level of commitment, time and training.

“I don’t know another sport where you can control a 1,000-pound animal while focusing on other things,” junior Isa Bekker said. “The horse needs to be in shape just as well as you need to be in shape — everything has to be together or you’re gonna hurt yourself or fail.”

Horseback riding isn’t that different from any of the other sports that people are more familiar with, like basketball or football. There are many different competitions, from lower level contentions to major championships.

“Like any sport, riders can still go to State and other events like that,” Vejvoda said. They even have leagues comprised of the competitions, equivalents of the NBA or the local sports associations.

“We have groups like 4H, the high school equestrian team, FFA, and Pony Club. There are tons more that I could name but the list would go on forever and it probably wouldn’t have any meaning to most of you anyway,” Fore said.

During competitions, the horses have another name that they use specially when they compete.

“A horse will have two names that they go by — a name that they are shown under and a barn name that you use the rest of the time. For example, I have a Connemara Pony named Kiana, but when she is in a race she’s called KD Kiana. We do this because the horse will associate its showing name with competitions, and will tend to get nervous and ready to race when called by that name,” Fore said.

Another major part of horseback riding is the equipment. There’s so much a rider has to do to take care of their animal, and it all comes at quite a cost.

This is a once in a lifetime opportunity to be one with your creature. It’s a crazy and enjoyable experience.”

“It’s another living, breathing, enormous mammal — of course it’s going to cost a lot!” Bekker said, “Along with the equipage for taking care of the horse, there’s also all the tackle for protection when actually riding.”

“You have to always have vests and helmets. There’s a lot of equipment because in the end this is a dangerous sport, and you could die,” Fore said.

On a happier note, one of the best parts of horse riding is the amazing kinship that riders can create with this great and powerful being of another species.

“Kiana knows me just as well as any other person. It is such a surreal connection,” Fore said.

Also, riders have to develop their way of communicating with the animal so that it will learn to listen and respect you. “You can’t just sit on a horse and tell it to go. You have to ask them, and you can’t lose your temper,” Vejvoda said.

Put all of these notions together and someone new to the sport has a vaguely approximated understanding of horseback riding. In reality, like all things, this is just something that’s too complicated to comprehend by reading it in the paper.

“There are so many different things you can do — there’s just no limit to horseback riding. You can do whatever you want with it,” Fore said.

Fore would like to see more people try the sport.

“We especially need more boys — horseback riding should be an everyone sport,” Bekker said. “This is a once in a lifetime opportunity to be one with your creature. It’s a crazy and enjoyable experience.”