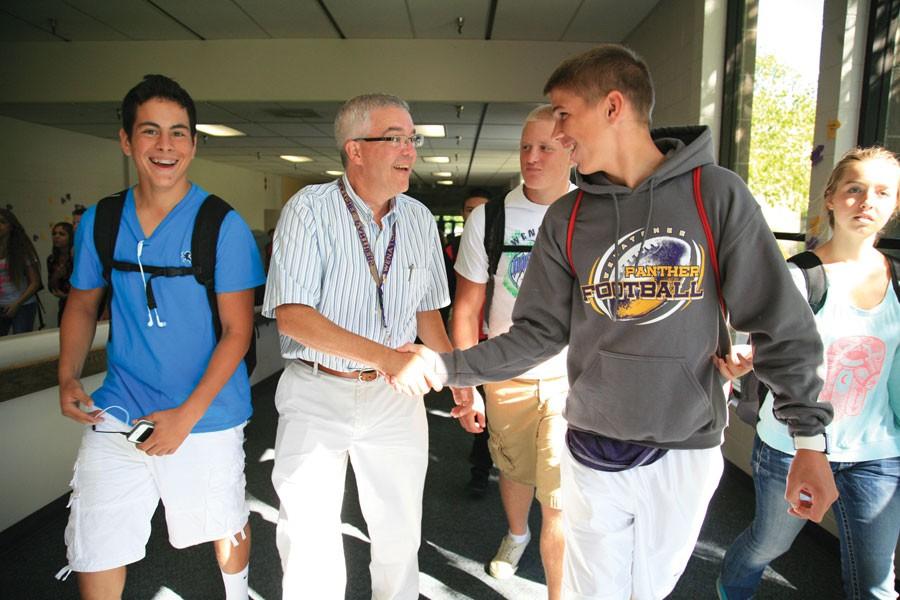 Principal Bob Celebrezze shakes hands with a student during his first month as principal at Wenatchee High School in 2013.

The Eastmont School Board unanimously approved the hiring of WHS Principal Bob Celebrezze as the principal of Clovis Point Intermediate School at last night’s regular board meeting. The next principal at WHS will be the fifth in 15 years.

“I’ve been very pleased with the work that Bob’s done at the high school in the last two years,” Superintendent Brian Flones said this morning.

Celebrezze told The Apple Leaf this morning that he wasn’t looking for a job and Clovis was the only school where he applied, after first hearing about it six weeks ago and being “intrigued.”

“I was at a stage in my career where I was excited about the opportunity for change,” Celebrezze said about his 2013 hiring at WHS. He knew coming in that WHS has about 2,100 students. His previous high school, in Moscow, Idaho, had about 700 students. Here, Celebrezze said he “struggled with a lack of connectivity with the students.” Clovis Point has roughly 600 students.

Eastmont Superintendent Garn Christensen said during Celebrezze’s interview, he expressed that WHS was too big for him, even though he was doing his best to be successful.

I’ve been immensely impressed with the quality and professionalism of the teaching staff.”

“Really big high schools are hard to lead in any community,” Christensen said.

Even though the school is so large, “Wenatchee High School offers an incredible education for students,” Flones said, listing the school’s music, arts, and Career and Technical Education as standout programs.

Some of the top challenges for a principal, Flones said, which could be viewed as opportunities, include the school size and pulling together the staff and students.

Although Celebrezze has only been principal at WHS for two years, Christensen is not concerned because it’s not a pattern for Celebrezze.

“This job is difficult because of the management perspective,” Celebrezze said, noting the paperwork and dealing with “mice in the hallway.” The job became more paperwork-driven than student-driven, he said.

“There’s a lot of demands on the principal with regard to their duties,” Flones said. The district continues finding ways to support the principal in doing their job effectively, he said, listing the dean of students position created two years ago as an example.

“We won’t task him with anything until July 1,” Christensen said last night. “He’s stepping into a really well-run school.”

Celebrezze’s first 13 years of teaching and administration were spent at the middle school level, as a teacher, department head, coach, dean of students, athletic director, and activities coordinator. In 1998, he was hired as an assistant principal at Lewiston High School.

The change in positions will also bring a change to Celebrezze’s salary. Currently, he makes a little less than $128,000 at WHS. The new position at Clovis will max out at $112,016, Trainor said this morning. Celebrezze said that has no significance to him.

“I plan to leave, wherever I leave, proud,” Celebrezze said in September 2013, after his first week as principal. “Whenever I leave, anywhere, I want to leave on top of my game.”

He told The Apple Leaf this morning that hasn’t changed, and that he is leaving both professionally and personally proud.

Flones said the window of opportunity for hiring a new principal is beginning to close. The district will have to make a decision within the next week to decide on opening the position, filling it internally, or going to an outside agency to lead the recruiting process, Flones said.

When Celebrezze was hired, the district contracted with Northwest Leadership Associates to lead the national search for Celebrezze. Flones said he didn’t expect to have to repeat the process so soon.

The firm was only responsible for “candidate recruitment,” Assistant Principal Donna Moser told The Apple Leaf at that time. District administrators then proceed with the hiring process, she said.

“It makes the process very transparent,” Wenatchee School District Executive Director of Human Resources Lisa Turner said of opening positions to both internal and external candidates in general HR terms. “It gives you the confidence in your decision” knowing that the process was very thorough, she said.

Turner said school district hiring season is usually early February to late April, so it’s not too late for the district to post the principal position for applicants.

For future principals, Flones said it’s important they are “aware of the whole landscape and what they’re getting into.”

“I’ve been immensely impressed with the quality and professionalism of the teaching staff,” Celebrezze said. “I have felt completely welcomed at Wenatchee High School.”

Celebrezze will leave his freshman son, Joe, enrolled at WHS. “For me, it’s always family first,” Celebrezze said, noting that Joe was uprooted from Moscow in eighth grade. “This is a great place for my son — he has great educational opportunities at Wenatchee High School.”

A transition process with Gibson, Christensen said, will be worked out between Celebrezze and Gibson.

Celebrezze said he will finish being the best principal he possibly can, and leave knowing it’s a better place. “I came to a great school,” he said, “and I’m leaving a great school.”