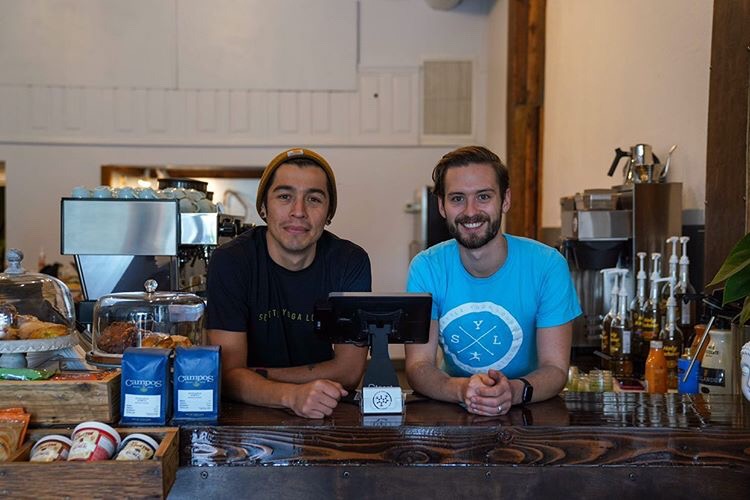 A safe space. A family. A unique collection of individuals. A sense of community. That’s how Elvis and Teddy Garcia would describe their new business in Wenatchee, the Seattle Yoga Lounge and Cafe. Originally intended to be a yoga studio for “anybody to come into,” the SYL in Wenatchee combines yoga and coffee in a way that creates a space for people to be with friends. As Elvis put it, “No matter who you are, you feel welcome in our space.”

Born in Seattle, the SYL found its way to Wenatchee through Elvis. He moved here in second grade, and has been involved with the WHS Golden Apple Marching Band and Colorguard for seven years. Once he and Teddy found a house that they loved, the decision to move from Seattle to Wenatchee was simple. Deciding to bring SYL with them, however, was another story.

“Starting a business from scratch in a new city you haven’t been in is like hanging your hat on hope,” Elvis said. “Hope that what you’ve built is enough. It’s about jumping in and not knowing if anybody’s gonna show up.”

The couple recall waiting 45 minutes when the doors first opened before anybody walked in. “There’s a lot of fear associated with it,” Elvis said.

But for Elvis, the idea of a cafe in Wenatchee had a more personal meaning. Growing up, he found a safe space in a local cafe, a place that would inspire him to bring SYL to Wenatchee years later.

“[That cafe] changed my life,” he said. “If we can change one person’s life like [that] changed mine, then we’ve made a difference.” SYL emphasizes a community vibe, but more specifically, a youth community. “We had a very strong youth presence from day one… ultimately that was the clientele that I was trying to cater to,” Elvis said. SYL is unique in that the community makes them special; SYL is more than just the owners. “I’m not SYL, it’s a ‘we’,” Elvis said. “We’re not one individual, we are a collective of individuals.”

Another unique aspect of SYL is the cafe. The idea to combine a yoga studio and a coffee shop made sense to the Garcias.

“A coffee shop is very similar to a yoga studio in the sense that they’re both places people go to do stuff with friends,” Elvis said. “Why not have them both in the same spot?” The diverse selection of drinks at SYL separates it from any usual coffee shop.

“What we’re trying to do is create a story around a certain set of drinks that provide an awesome experience for people coming in,” Elvis said. Having unique names such as the “Evergreen” or the “Sapling” helps make “trendy drinks,” something that “makes a coffee shop not go stale,” Elvis added. “Everybody can make you a latte… anybody can make you a mocha. What we try to do is go above and beyond by bringing high quality ingredients to our drinks.”

While the cafe has been open since June, the yoga studio is still a “work in progress.” The owners hope to have it open by the end of September. “Opening a business requires a lot of manpower, but more importantly, it requires a lot of money,” Elvis said. The couple have been doing all of their own construction to save on opening costs. The yoga studio will run 4-6 classes a day, every day of the week. “We hear that people are very excited about [it],”  Elvis said.

To the Garcias, the reception in Wenatchee to SYL has been “very welcoming.” Just as they will accept anyone who walks in their doors, they have been accepted by the Wenatchee Valley. “The downtown association has really welcomed us into our space as a business, and we’d love to show our community what we have been able to create in downtown Wenatchee,” Teddy said. “Come and experience what [SYL] has to offer.”